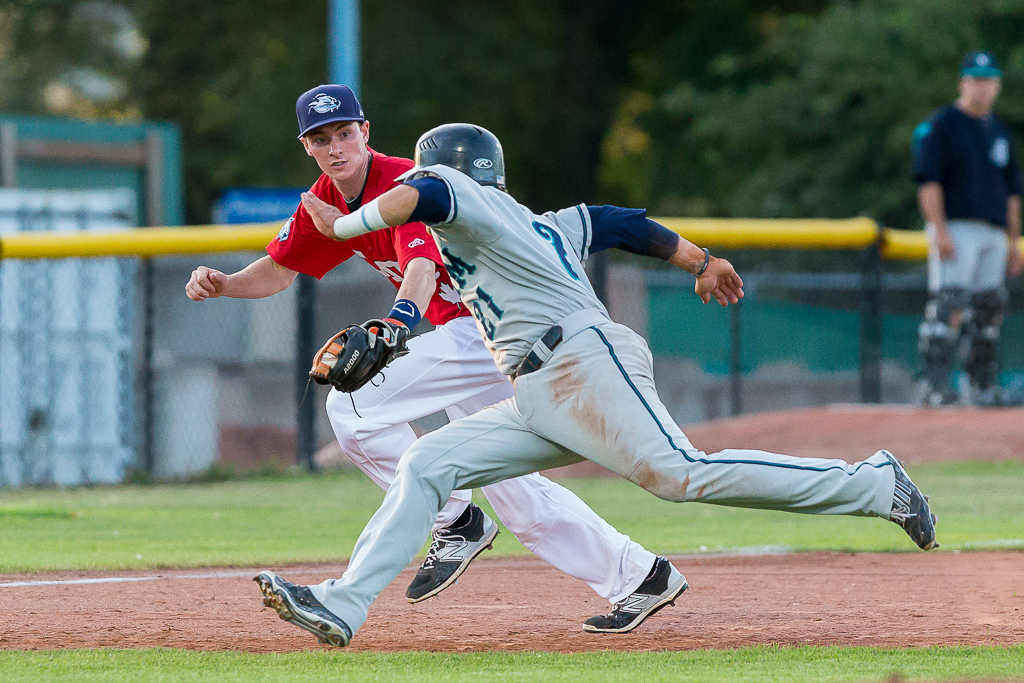 It wasn’t one of those lightning-bolt moments.

Michael Gretler’s decision to retire from professional baseball was more of an ongoing process. The former Pittsburgh Pirates prospect, who spent two formative summers playing on Canadian soil, listened to what his mind and body were telling him.

As hard as it was, he listened.

“It was definitely a decision I did not take lightly,” the 25-year-old said from his home in Seattle, just a short, scenic ferry ride away from Victoria, where he spent the 2015 summer season as a gem of a third baseman for the HarbourCats of the West Coast League. The following year, he took his talents to the Western Canadian Baseball League, where he claimed the most outstanding player award with the Okotoks Dawgs. 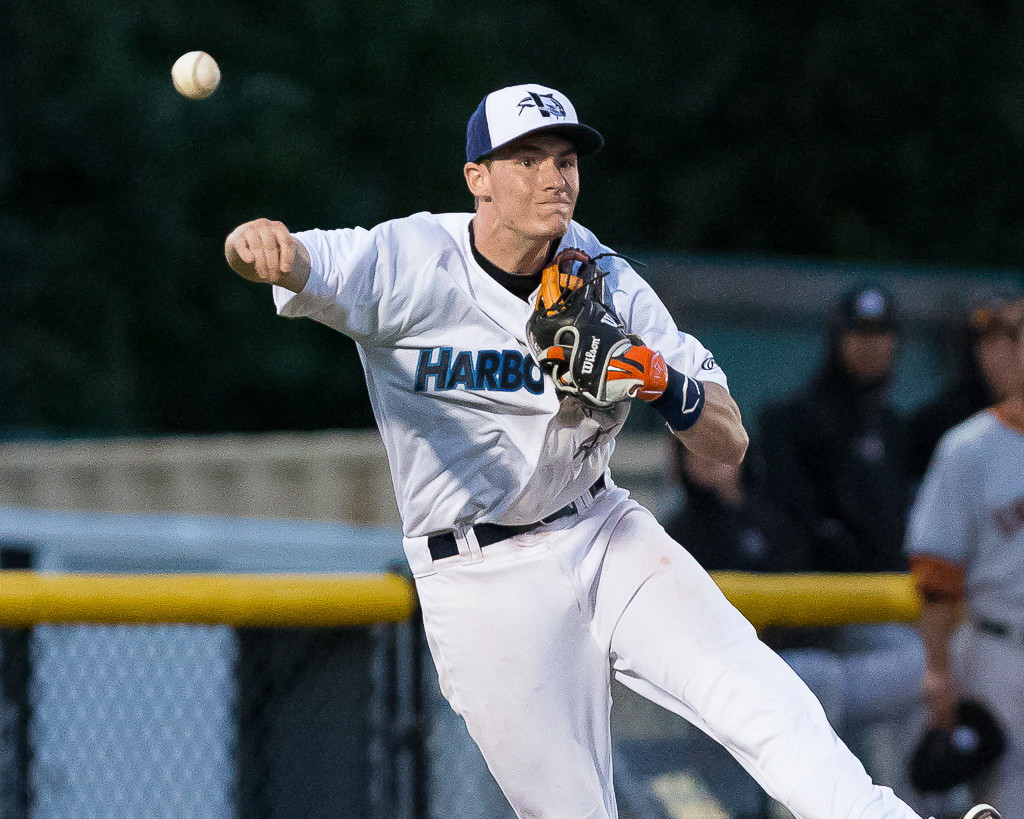 Michael Gretler was a standout third baseman for the Victoria HarbourCats in the summer of 2015.

“Baseball has done so much for me and it’s going to continue to be a part of my life but there are things in the working world and business world that I want to do and want to put on my resume as time goes on,” Gretler added. “And then – really – playing in the minor leagues, it’s a grind, man. It’s not a lot of pay, long bus rides, being away from your family and friends for an extended period of time. All those factors played a role (in my decision to retire) and I think it kind of boils down to the fact that if you’re not fully committed to something, and your heart and your passion isn’t fully there… it’s a grind as it is but then you lay those factors on top of that grind and it becomes much more difficult.”

Gretler officially hung up his spikes on Feb. 11, 2020. As a member of the Pirates organization he played two seasons in the minors, his last team the single-A Greensboro Grasshoppers of the South Atlantic League. Gretler also toiled for the West Virginia Black Bears and Bradenton Marauders.

The Pirates thought so highly of Gretler that they chose him twice in the MLB draft – in the 39th round in 2017 and the 10th round in 2018. They gave him a spring training call-up in March of 2019.

A product of Bonney Lake High School in the Greater Seattle area, Gretler was such a sizzling baseball commodity that he was actually drafted three times. The Boston Red Sox were the first MLB team to lay claim when they picked him in the 39th round in 2014. Gretler deferred the first two times in favour of attending, and then remaining at, Oregon State University, where he was a beloved member of the OSU Beavers from 2014 to 2018. 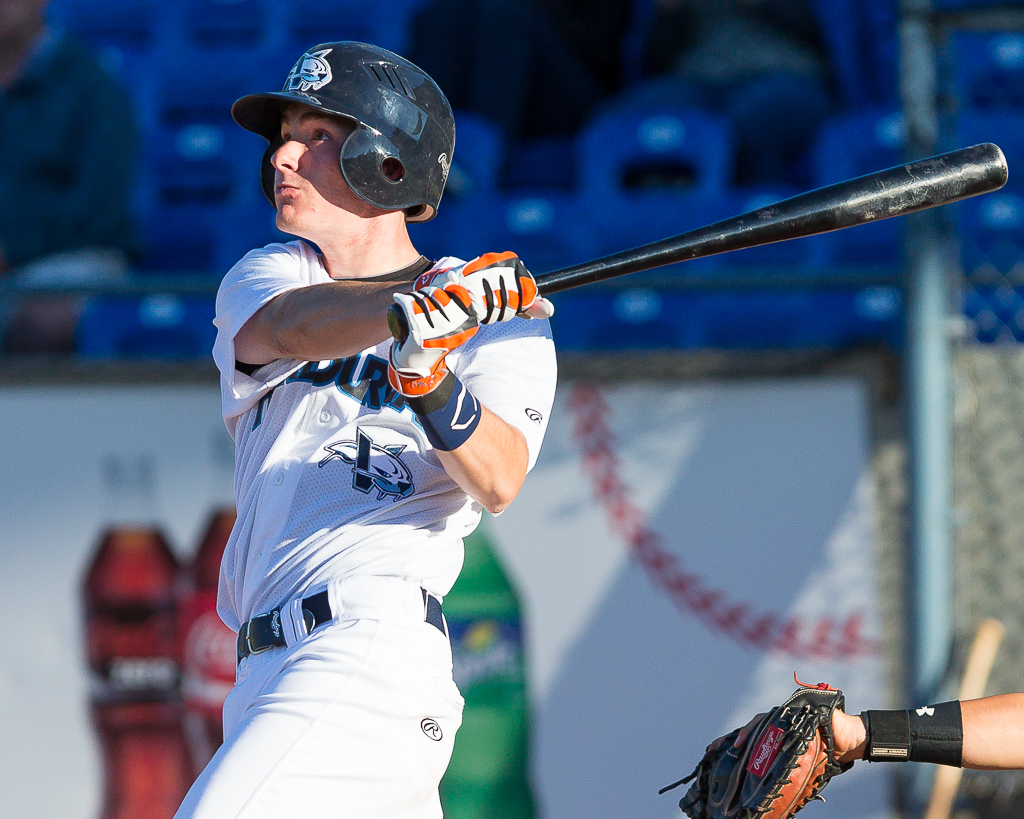 During his time with Victoria, Gretler would appear in 32 games, hitting .236, with one home run and 12 RBI, but also walking 23 times and scoring 20 runs.

When Gretler reflects on his career, he has no trouble picking out his highlight: going out as a champion in his final game with the Beavers. In that 2018 NCAA Division 1 season, OSU advanced all the way to the College World Series in Nebraska and eventually defeated the University of Arkansas Razorbacks in a best-of-three final that went the distance. Arkansas prevailed 4-1 in the opener, Oregon State stayed alive with a 5-3 extra-innings victory in Game 2 and then won 5-0 in the clincher.

“Obviously the individual accolades of playing college baseball or being drafted are great but that team camaraderie – as much time as you spend with those guys, you form some really special bonds that are going to go on for the rest of our lives – and being able to experience winning the College World Series with them was kind of like the perfect mountaintop for my career,” said Gretler, who was OSU’s starter at third base. “And it happened to be the last game of my college career so it was the cherry on top of what’s been a really, really exciting career.”

Gretler made his playing debut with the Beavers in February of 2015 and, later that year, arrived in Victoria for his first crack at baseball north of the border. While he’d been to Victoria a couple times before, the notion of living and playing in Canada left him feeling a little uneasy. But joining the HarbourCats, he quickly discovered, was the closest thing to professional baseball he had yet tasted. His nervousness evaporated and he made the absolute most of his opportunity.

Gretler at OSU, with the HarbourCats in 2015 and with his last pro team, the Greensboro Grashoppers, in 2019

“I remember it being the first experience of that challenge of playing baseball every single day,” he said. “Because in college, you play a weekend series, you get a couple days off, you might have a midweek (game) and another day off, and you might practice here and there. But the game every single day is why baseball is such a grind and such a challenge – the mental side of that and the physical side of that where you’re playing 16 games in a row before you get an off-day and your body is hurting after Day 8 and you’ve still got eight more games to go. It was a great introduction. And what I think is so great about the league, it gives guys that experience at a younger age that can then prepare them for hopefully a career in the minor leagues.”

Playing with and against such high calibre players is another thing Gretler remembers about his stint with the HarbourCats. And then there was the buzz of home games, routinely held in front of packed stands at Royal Athletic Park.

A very popular HarbourCat, one of Gretler’s images has adorned the front windows of the HarbourCats offices since late 2015.

“You hear you’re going to British Columbia and you’re like, ‘They play baseball up there?’ It’s just not the first thing that comes to mind,” Gretler said with a grin. “Us dumb Americans think of the hockey and the other sports so I didn’t really know what to expect – if they were big baseball fans. I knew, growing up, when the Blue Jays would come to play the Mariners, there was always a big presence of Canadian fans that would come down for those games but I really didn’t know what to expect from a college baseball standpoint. But it was unbelievable.

“I think the first game that I showed up was a sellout and you’re like, ‘Wow, this is not really what I was expecting for college baseball in Victoria.’”

HarbourCats fans immediately loved Gretler for his honest, hardworking approach to the game. That – combined with his athleticism, skill and professional demeanour on and off the field – will undoubtedly leave him as one of the favourite HCats of all time.

“He was probably the nicest kid we’ve ever had play for us – just really personable, a really engaging young man,” said Jim Swanson, general manager of the HarbourCats. “He played almost all third base for us and he was outstanding. Glovework doesn’t go into slumps, right?

“At the plate, he struggled, and struggled in the fact that he was really a guy getting his first real solid look at college pitching. Our league is a pretty good league – guys are going from here to pro baseball. But he worked hard, he was a battler that way.”

The next summer, 2016, Gretler put it all together with Okotoks. As the team’s most valuable player, his defensive game was as spotless as ever. And, with a bat in his hands, he was a beast (34 games played, .331 average, 45 hits, 11 doubles, four home runs, 36 RBIs). He also picked up 18 walks and swiped two bases. 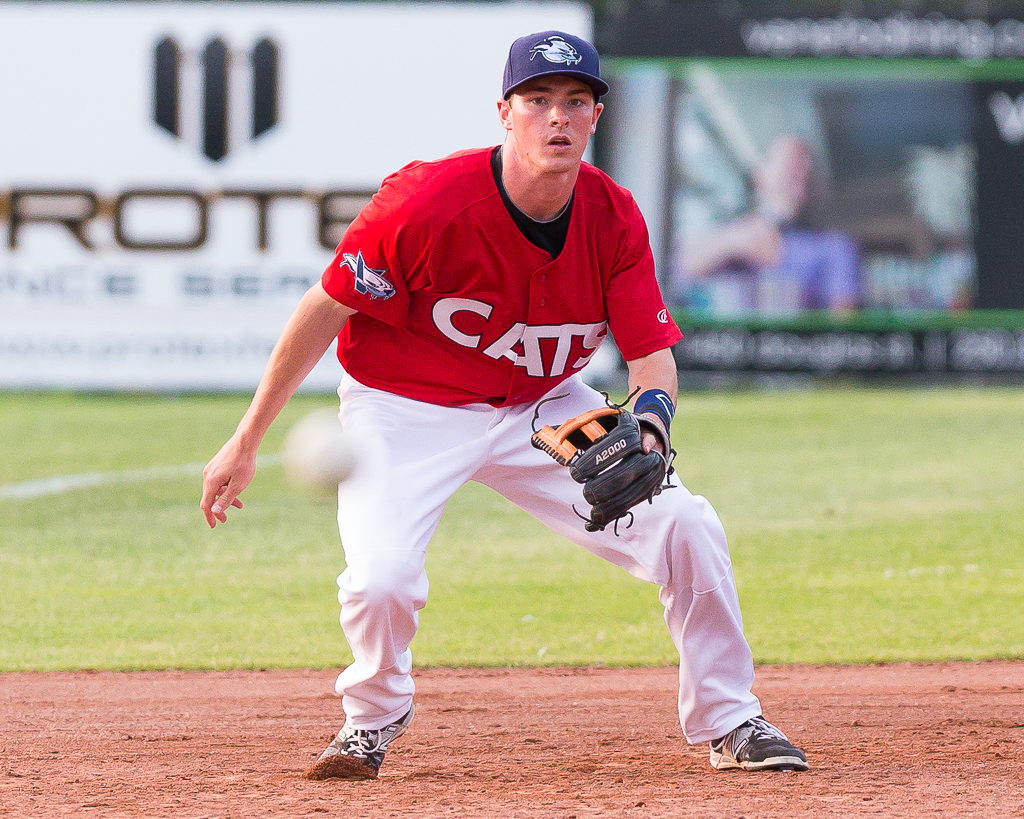 While Gretler is giving up the hot corner to focus on his career in the biopharmaceutical industry and to his upcoming wedding in October, he is thankful for his time in Victoria, Okotoks and the pros and hopes to give back to the game someday, perhaps at the coaching level.

For Gretler, the stops in Victoria and Okotoks were all part of the journey and he’s thankful for those experiences and memories. With professional baseball now behind him, he has turned his attention to building a career. He now works in the biopharmaceutical industry as a sales representative for AbbVie. On a more personal level, he got engaged to high school sweetheart Emily last July, with the wedding planned for October in Seattle.

“We’ve been dating since my senior year of high school,” Gretler said. “I was getting a lot of pressure – everyone that I knew was like, ‘When’re you gonna ask? When’re you gonna ask?’ So we’re excited. We’re hoping the pandemic is behind us. It’s going to be a big baseball reunion, that’s for sure.”

Gretler certainly isn’t done with the game that has given him so much. He plans to get into coaching, and he’ll always be a fan.

In the near future, hopefully this summer, he’ll head down to the Seattle waterfront and jump on the Victoria Clipper ferry for a ride north and a HarbourCats game.

If there’s ever a Michael Gretler bobblehead night at Royal Athletic Park, he’ll be there for sure.

“It would be the first time ever I’d have my own bobblehead,” he said with a chuckle. “I’d definitely have to make my way up there for that.”

Jason Peters is a freelance writer and editor based in Prince George, British Columbia. Visit his website at www.frontpagepublications.net.