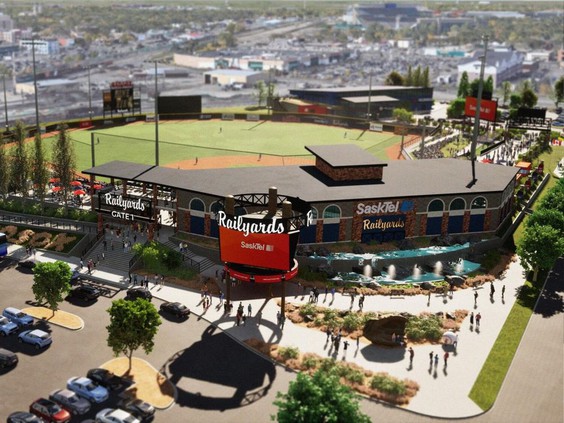 Regina, SK ( April 4, 2021) – The Regina Red Sox Baseball Club (Club) a franchise member of the Western Canadian Baseball League are pleased to release concept plans for a 3500-seat state-of-the-art baseball stadium with the proposed location being the vacant railyards on Dewdney Avenue.

While the Red Sox would be the anchor tenant, the stadium would also be used by other baseball teams and leagues, in addition to functioning as a first-class venue for spring and summer festivals, concerts, flea markets and movie nights in the park.

In conjunction with the concept plans, the Club is also pleased to announce the signing of a Memorandum of Understanding with Living Sky Sports and Entertainment Inc. (LSSE). LSSE worked with the Club developing the concept plans and will help facilitate the Club’s financial participation with stadium construction costs.

Gary Brotzel, president of the Club said, “We are pleased to make this announcement today and encouraged to have been able to present our plans and vision to City Council this past Wednesday. A ballpark stadium is long overdue, and we hope the City of Regina see the merits of our vision and plan so we can work together to make this a reality. Brotzel added, “ We average 32 games per year with preseason and playoffs and we anticipate drawing 3200 plus fans per game. This means over a 100,000 people a year traveling to the downtown warehouse district between May and August. The vibrancy and economic activity of our entire downtown core will be positively affected by baseball games and the other events held at the stadium. For perspective, the Okotoks Dawgs, a team in our league, regularly attract 4000 fans per game – in a stadium similar to what we’ve proposed for the rail yards.”

Bernie Eiswirth, general manager of the Club said, “It’s becoming increasingly difficult for us to play at a 60-year-old field and recruit quality players and remain competitive – so we are very excited about the prospect of a new baseball stadium for Regina. As of now, Alberta teams have superior venues that gives them a significant recruiting advantage, but just as important, Currie’s old infrastructure severely limits our options for food and beverage, seating, parking and our ability to attract corporate sponsors. We need to offer a great environment with a competitive team, so fans have a memorable experience and want to keep returning to the ballpark. That’s not the case now playing a Currie.” Eiswirth added, “

Alan Simpson, Founder of LSSE commented, “We are eager to work with the Red Sox and the City of Regina to advance plans, complete further due diligence, figure out financing, and hopefully bring this proposed rail yard infrastructure project to fruition.” Simpson commented, “After touring Currie its apparent its best before date has long since passed. The baseball stadium the Red Sox envision would be a wonderful enhancement to our infrastructure in the downtown core. It would stand as a cornerstone of economic activity and pride in our community for the next 20 years.”

The Regina Red Sox are a summer league collegiate team based in Regina, Saskatchewan with roots stemming back to the 1940’s. The club operates as a franchise member of the Western Canadian Baseball League playing a 56-game schedule during the spring and summer with 28 home games plus preseason and playoffs held at the ball diamond at Currie Field. The Red Sox have a storied history in the city winning the WMBL title in 2011 and again in 2012. The Red Sox also won the SMBL (Saskatchewan Major Baseball League) championship in 1976 and 1977, and the SBL (Southern Baseball League) in 1942, 1953, 1955, 1960, 1964, and 1969. Connect with the Red Sox at www.reginaredsox.com or on Twitter @ReginaRedSox.

Living Sky Sports and Entertainment Inc. is a Saskatchewan based company initially incorporated for the purpose of launching a professional soccer club for the Province of Saskatchewan, and more generally, the development of the sports market in Saskatchewan. LSSE entered into an agreement with Canadian Soccer Business (CSB) and acquired the exclusive rights for the development and launch of a Canadian Premier League (CPL) team. Most recently, LSSE entered into a Memorandum of Understanding with the Regina Red Sox to assist with the development of a new baseball stadium in Regina. The founder and CEO of LSSE is Alan Simpson a life-long resident of Saskatchewan. Connect with LSSE at lssa.ca, on Twitter @livingskysports1, on Facebook @livingskysports and on Instagram @livingskysports.