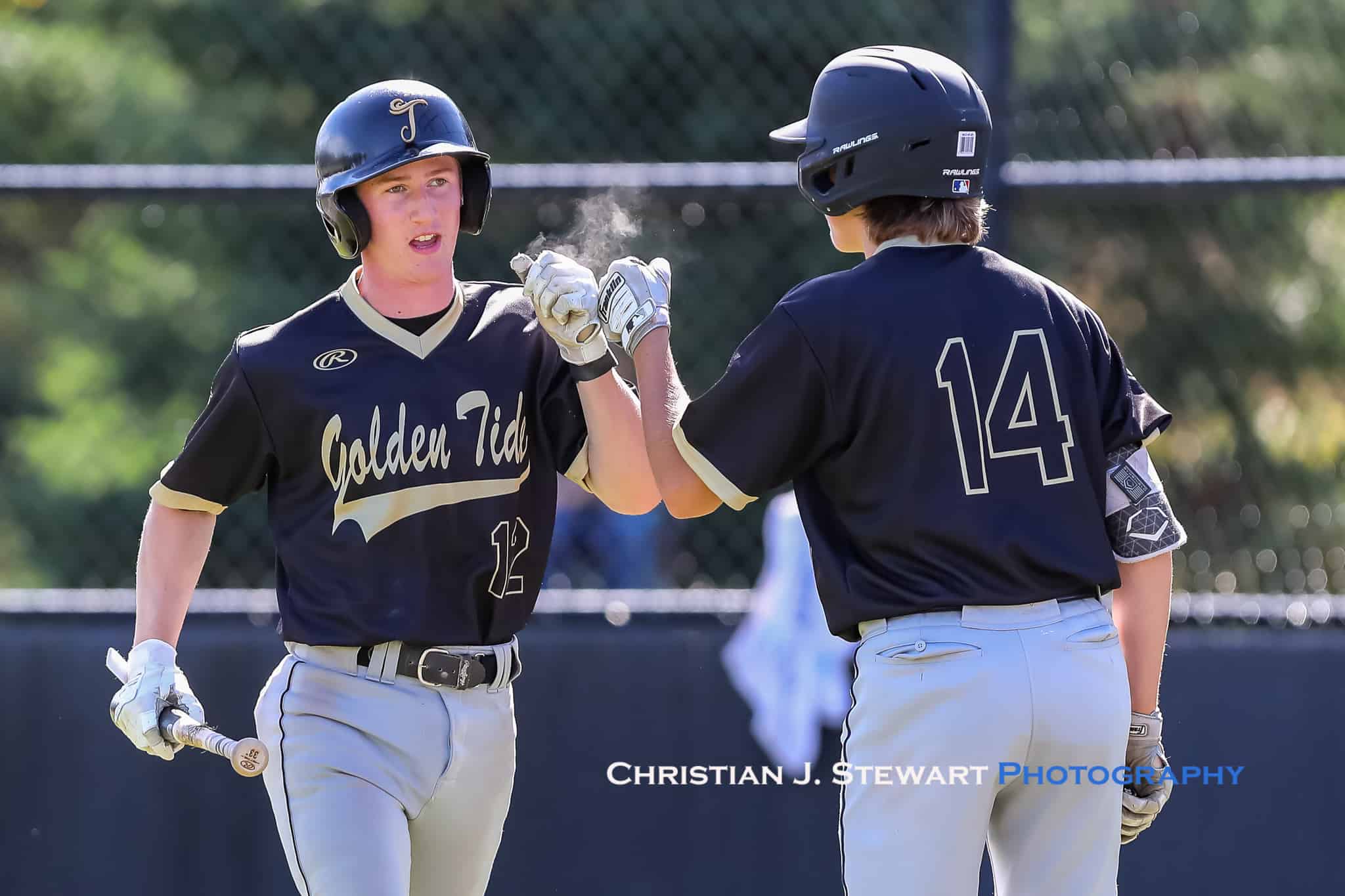 September 9, 2021, Victoria, BC – Jordan Bond had a triple, single and two RBI in his only two at bats to help lead the Victoria Golden Tide to a 7-1 win over the Victoria Mariners Thursday afternoon in the opening game of the Zack Downey Memorial Tournament being held at Layritz Park in Victoria. The Tide’s Jordan Bond would have an RBI-triple and RBI -single to lead the Golden Tide offence (Photo: Christian J. Stewart)

The win was the first in team history for the Golden Tide and Head Coach Curtis Pelletier, as Thursday’s game marked their first official game action in their inaugural fall season in the Canadian College Baseball Conference (CCBC). Tyler Burton slides safely into second ahead of the throw to the Mariners Sam Shaw, earning the first stolen base in Golden Tide history (Photo: Christian J. Stewart)

The game remained close after that and following Bond’s triple and then an RBI single from Alden Holzwarth, both in the fourth inning, the Tide held a slim 3-1 lead. Parker Harris would have the first RBI in Golden Tide team history with this swing in the first inning Thursday (Photo: Christian J. Stewart)

That would not last long as the Tide would put things away in the fifth inning, scoring four runs, thanks to a two-RBI triple from Davis Jack that scored Burton (single) and Austin Wall (walk), Bond’s RBI single and another RBI single from Holzwarth. Tide pitchers were effective on the day, with Ethan Dean – the first starting pitcher in Tide history – Nate Major and Jacob Popadynec all pitching two innings each (games in the tournament are just six innings in length) and holding the Mariners to just three hits in total, two of which, a single and triple, came from Mariners’ lead off hitter Jaydon Malinowski. The Mariner’s Jaydon Malinowski would have two of the three Mariner hits against the Tide, including this triple (Photo: Christian J. Stewart) They would also be helped out by some slick defence early from third baseman Brandon Green and solid middle defence later in the game from the Wall twins, Myles and Austin. Alden Holzwarth would have a pair of RBI-singles in theTides’s 7-1 win over the Mariners (Photo: Christian J. Stewart)

The Tide are next in action on Friday at 2:30 pm when they take on the Saskatchewan Prep Academy. They then face the Victoria Eagles on Saturday at 9:30 am. The Tide’s Tristian Bolger would have a single and run scored in his Golden Tide debut (Photo: Christian J. Stewart)

In other action at the Zack Downey Tournament on Thursday, the Victoria Eagles had clutch hits from Owen Luchies and Oliver Mabee and a brilliant pitching performance from Sam Jordan to defeat the Mid-Island Pirates 6-0. The Tide’s Davis Jack heads to third with a triple in the fifth inning of Thursday’s game (Photo: Christian J. Stewart) On Saturday, the Tide and Eagles kick things off at 9:00 am, followed by Saskatchewan against Parksville at 12 Noon. The Mariners will then play the Pirates at 2:30, with the consolation game (5th place vs 6th place) going at 5:00 pm. Bryce Carroll scampers home with one of the Golden Tide runs, in front of a good number of fans that came out to watch the Tide’s debut game (Photo: Christian J. Stewart)

All game are at Layritz Park in Saanich. More images from the Golden Tide / Mariners game can eventually be found at https://christianjstewart.zenfolio.com/p321055318

Victoria HarbourCats – THE TIDE IS IN! College baseball arrives in Victoria