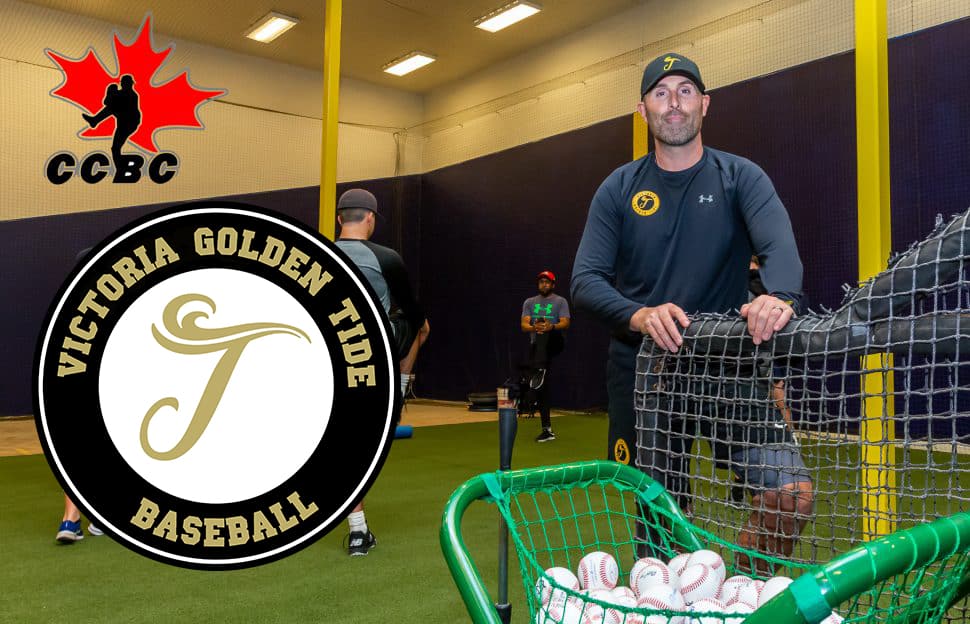 Victoria, BC – Victoria Golden Tide Head Coach Curtis Pelletier is pleased to announce today the full coaching and training staff that will guide the team during their inaugural season of the Canadian College Baseball Conference (CCBC), which begins fall play this September.

Orr was an all-star player in the BC Premier Baseball League and enjoyed success with Team BC at the 2004-2005 Canada Cups and with the Junior National team, winning bronze at the Worlds in 2006. He was offered a full scholarship to the University of Kentucky, but turned that down when the Los Angeles Dodgers selected him in the 4th round of the 2006 MLB entry draft. Orr spent five years as a position player in the Dodgers organization and then played a year for the Victoria Seals in the independent Golden League. In 2021 he signed as a pitcher with the Minnesota Twins and finished his pro playing career as a player/coach of the Montpellier Baracudas of the French Elite League.

“I’m thrilled to be joining the Golden Tide coaching staff for the inaugural season,” says Orr. “This program will play a vital role in developing the next generation of baseball talent, and will create endless opportunities for its players. I’m ready to get to work with our athletes and coaching staff and look forward to building an elite level program dedicated to the development of its players.”

Pitching coach Ethan Fox will be familiar to Victoria fans as he played for the Victoria HarbourCats in the 2017-2019 seasons. From Campbell River, BC, Fox played for the Parksville Royals (PBL 2013-2015) and Douglas College Royals (NWAC 2015-2017), before heading to the Avila University Eagles of the NAIA for the 2017-2019 seasons. He is the Pitching / Arm Care Coordinator of the HarbourCats Players Club and is currently completing his BSc in Kinesiology at the University of Victoria.

Third base coach Aaron Witzke played three years of college baseball at Vancouver Island University where he received a Diploma in Physical Education and then completed is Bachelor of Education at the University of Victoria and will begin the Masters of Education program there this fall. He is currently a teacher at Esquimalt High School and the Director of a Baseball Operations at the HarbourCats Players Club.

Another Victoria native, Assistant Coach Shawn Loglisci caught the eyes of the scouts in 2005 when he was drafted in the 34th round by the Dodgers, but chose instead to go to college where he played at Vancouver Island University, College of Southern Idaho and Indiana Tech University. He played for the Victoria Royals during their brief pro stint here and for a number of senior men’s teams including the Langley Blaze, Victoria Mavericks and Regina Red Sox and has coached the Victoria Eagles in the BCPBL from 2010-2015. He is now also working as the Junior Coordinator of the HarbourCats Players Club.

Assistant Coach Ryan Haines grew up in Calgary where he played at the Alberta Baseball Academy and at the Babe Ruth level during high school. He played college ball at the Prairie Baseball Academy in Lethbridge and Mayville State University and was a member of Team Alberta in 1997, where he won a bronze medal at the Canada Summer Games. He also won a summer league National Championship playing for the St. Albert Tigers.

Originally from Cardiff, Wales, Strength and Conditioning Coach Jeremy Cordle is a graduate of St. Michaels University School in Victoria where he was the Island’s top Male athlete in 1991 and was runner up for the same award at Provincial level. Jeremy has been part of multiple city, Island and provincial tittles in Basketball, Track and field , Cricket and Rugby as an alum of the Castaway Wanderers Rugby Club where he was a member of 4 provincial championship winning squads and a National Champion with the Vancouver Island Crimson tide (VIRU). Jeremy has worked as a private athletic trainer for the last 11 years , working with athletes at elementary, high school, university, professional and masters level.

The Golden Tide begin their fall exhibition season on September 11, with 11 home games, plus inter-squad games at Wilson’s Group Stadium at Royal Athletic Park in Victoria. The fall home opener is on Friday, September 17th at 6:00 pm against Thompson Rivers University.